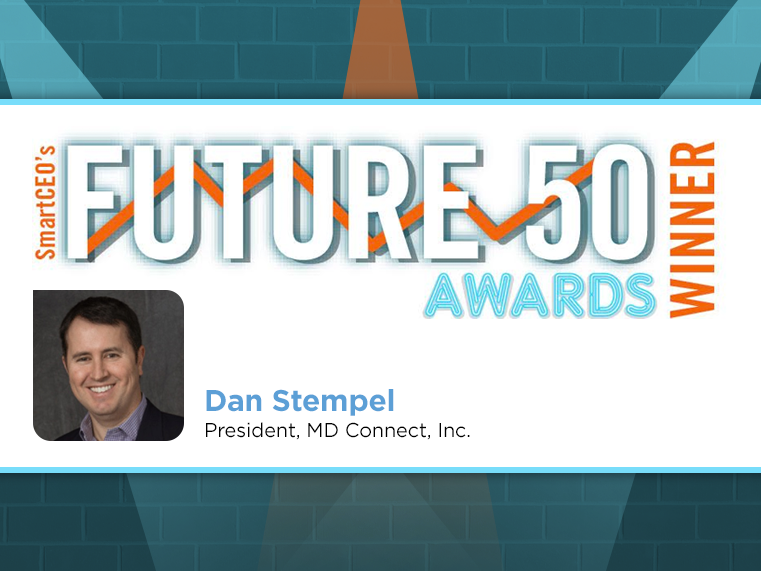 MD Connect President Dan Stempel has been named as a 2016 recipient of the Future 50 award. Leader of one of the 50 fastest-growing mid-sized companies in the region, Dan fortifies his reputation as one most influential entrepreneurs in the Northeast.

MD Connect is pleased to announce that its President, Dan Stempel, has been named a Boston SmartCEO 2016 Future 50 Award winner. One of 50 honorees from the Greater Boston area, Dan marks his place as one of the most exceptional entrepreneurs in the Northeast region.

The Boston 2016 Future 50 Award recognizes the 50 fastest-growing mid-sized companies in the region, chosen based on a three year combined average of revenue and employee growth. A forward-looking honor, the Future 50 Award is given to companies that carry the region’s economy forward, and whose leaders embody the entrepreneurial spirit and drive critical for long-term success.

Together, the 2016 Future Award winners represent more than $3.4 billion in annual revenue and employ more than 12,400 professionals across the region.

This impressive group, which includes Hubspot CEO Brian Halligan, YesWare Founder Matthew Bellows, CEO and President of Rapid7 Corey Thomas, and ALKU CEO Mark Eldridge, will be recognized in SmartCEO magazine and celebrated at a black-tie-optional awards ceremony on June 15, 2016 at the Boston Park Plaza Hotel.

“We’re thrilled to have been included on this list of truly world-class companies,” says Dan. “For MD Connect, this is both a validation of our core business philosophies and a testament to our exceptional team. As we continue to deliver unparalleled service for our clients, we believe that we will see even more success in the months and years to come.”

Of the impressive group, SmartCEO President Jaime Nespor-Zawm had this to say:

“Ask any CEO and they’ll tell you that leading a fast-growing company is one of the most challenging and fun things an entrepreneur can do. Whether they’re just starting out or rapidly trying to scale an established operation, this year’s Future 50 winners have executed their growth visions year after year, created job opportunities and made our region a better place to work and live.

“There is nothing these amazing entrepreneurs can’t do if they put their minds to it. We honor them for their unwavering determination to rise above the rest and build the future of our region, our nation, and the world at large.”

More than 300 local business executives and guests are expected to attend this year’s black-tie-optional awards gala at the Boston Park Plaza Hotel to celebrate the winners and their achievements. The event will kick off with a cocktail reception and high-energy networking followed by a video-packed awards ceremony and seated dinner. The evening and celebration will culminate with dessert and additional networking.